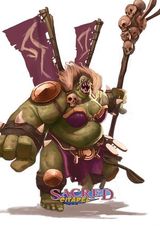 You'll encounter a lot of foes in Sacred Citadel.

Some monsters are level-specific but some of them can be seen in multiple levels.  Grimmoc Mana is the Evil Queen of The Kingdom.

The first mob you'll encounter, those are  Big Mama's The Evil Queen's warriors. They are tough and resilient, using a polearm. The orange ones are tougher and can assume a position to resist being knocked back or up, but are still vulnerable to stuns.

Grimmocs' slaves. First encountered in the Mines, they are not very tough but they come in big numbers and wield a pickaxe.

Special Attack : can attack you with a crossbow.

The Jungle beasts are resilient enemies found in the jungle as their name hints. They can do a backflip attack that throws your character in the air.

Those are dangerous. They usually come with other mobs and can resurrect them if they die.

Special Attack : can resurrect himself once.

These fish-like monsters are coming from the water in large numbers. Not tough, but they leap from anywhere.

Special Attack: Leaps vertically to damage you when they fall down.  Most dangerous when they appear underfoot at the start of the leap.  Cannot be blocked.

Resurrected from the grave by The Main Villain Grimmoc shaman. Not very dangerous, they mostly help other mobs to take you down. The danger come from the number.  Similar to Miners, but they attack faster and deal much more damage.

Retrieved from "https://sacred.fandom.com/wiki/Monsters?oldid=4118"
Community content is available under CC-BY-SA unless otherwise noted.